PGE Baltica has completed wind testing in the Baltic Sea

PGE Baltica has completed its two-year wind measurement campaign in the Baltic Sea using a floating LiDAR device. The research allowed the collection of high quality data confirming the appropriate wind conditions for the investment. This is another step towards launching offshore wind farms under the Offshore Program at the PGE Capital Group. Wind measurements at farm locations are necessary to estimate their productivity.

The next stage of preparations for the construction of wind farms in the Baltic Sea is behind us. The wind farms are a key element of the PGE Group's transformation plan towards low-emission and a pillar of change in the entire Polish power sector. The implementation of this project alone will avoid emissions of around 7 million tonnes of CO2 per year, and the green electricity produced in this way will be able to supply up to 4 million households – says Henryk Baranowski, president of the Management Board of PGE Polska Grupa Energetyczna.

In the case of offshore wind farms, the main factor conditioning their effective operation is adequate wind. In order to accurately estimate how much energy a given farm will be able to generate, a number of analyses are carried out based on wind research. Therefore, the accuracy of the measuring device and the reliability of the data it obtains is crucial.

PGE Baltica has decided to use floating LiDAR technology (LiDAR – Light Detection and Ranging), i.e. a device that uses infra-red laser beams to measure the speed of air masses moving over it. In the sea version is mounted on a self-sufficient energy floating platform (buoys). Shore communication is provided via satellite telephony. One of the many advantages of LiDAR, compared to a traditional measuring mast, is the ability to perform tests exactly at the height of the rotor axes of the planned wind farms.

The conducted research concerned, among others, wind speed, direction, wind strength and turbulence. It lasted continuously for 24 months, which is enough time to collect a representative sample of measurements. According to PGE Baltica, they are sufficiently accurate, whereas their initial assessment confirms favourable wind conditions at the location of the wind farms of the PGE Capital Group.

Wind tests are just the beginning of preparations for the construction, however they are a key stage for the implementation of the investment. I am glad that it has been completed, especially in the context of the decision on environmental conditions received in January for Baltica 2 and Baltica 3 wind farms. These are the next steps bringing us closer to launching the first offshore wind farms by PGE Baltica – says Monika Morawiecka, president of the Management Board of PGE Baltica. 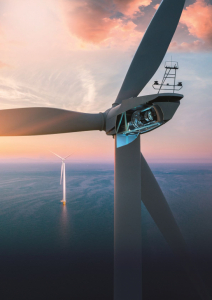 PGE Baltica was established in January 2019 as the company responsible for implementing the Offshore Program in the PGE Capital Group which coordinates preparations for the construction of three wind farms:

PGE Polska Grupa Energetyczna is the owner of PGE Baltica and EWB-1-3 special purpose vehicles. All three companies have location permits enabling the construction of offshore farms in designated areas of the Baltic Sea.

Ultimately, the PGE Capital Group intends to sell its selected strategic partner 50 percent shares in two companies – Baltica 3 and Baltica 2 – and then jointly implement it in the form of a joint venture. The goal of cooperation is also building competence by PGE Baltica so that in the future the company could implement offshore projects alone.

On 20 December 2019, PGE signed a preliminary agreement with Ørsted describing the framework for cooperation in the transaction of acquisition by the Danish company of shares in two projects for the construction of the offshore wind farms EWB2 and EWB3. The agreement, which is non-binding, will be the basis for further negotiations between PGE and Ørsted, which are to lead to agreement of detailed transaction documentation.

On 24 January 2020, the Regional Director for Environmental Protection in Gdańsk issued a decision on environmental conditions for Baltica 2 and Baltica 3.